The mission of Giorgio Armani is to continually create clothes and accessories that aspire to a kind of perfection that transcends through fashion.

Giorgio Armani was born on 11 July 1934, in Piacenza, Italia, which was bombed repeatedly during World War II (WWII).  Giorgio moved to Milano with his family (including a brother and sister) in 1949.  Giorgio initially went to Medical School in Milano, but dropped-out in 1957 to take a job as a buyer.  He held this position for seven years at La Rinascente department store.

Between 1961 and 1970, Giorgio worked at a fashion house, Nino Cerruti, as an assistant designer, where he designed for the menswear label "Hitman."  Giorgio left in 1970 to pursue freelance work.  In 1974, Giorgio partnered with Sergio Galeotti to establish his first freelance menswear label, Armani.  The two sold their used Volkswagens for start-up capital for the Giorgio Armani, S.p.A. company, as told to Forbes.  The womenswear line was introduced in 1975.  Giorgio's sister, Rosanna, joined the group as well. 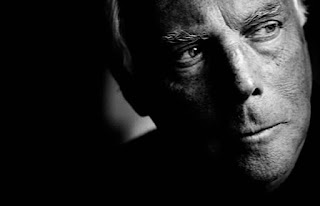 Giorgio Armani
In 1979, the Giorgio Armani Corporation was first established in the United States.
American Gigolo (1980) was the first time Armani was seen on the big screen, designed for Richard Gere's character.  Armani also designed made-to-measure suits in 2008 for Bruce Wayne's character (Christian Bale) in The Dark Knight and for Batman (1989).  Armani also designed clothing for the following films/tv series: Pulp Fiction (Emporio Armani), Ready to Wear/Prêt-à-Porter (1994), and was responsible for much of the pastel wardrobe for Miami Vice (TV series, 1980s).  Armani also provided wardrobes for musicians, such as: Billy Joel, David Bowie, Paul Simon, and Eric Clapton.

In 1983, Giorgio Armani was awarded the CFDA International Award.

Galeotti died at his home in Milano in 1985 due to a heart attack, caused from the AIDS virus.

In the late 1980s, early 1990s, Giorgio turned down several offers for takeovers from designers such as Jeanne Lanvin design house, Prada, Gucci, and LVMH.  Remaining the sole controller of the company.

Armani Exchange (A/X) store first opened in New York City in 1991.  And in 1997, Collezioni Giorgio Armani stores opened in Milano, Tokyo, and London.  The Armani Signature label is the most expensive of all Armani labels and is available in 75 of its worldwide boutiques.

Of all the designers, Armani was the first to ban models with a Body Mass Index (BMI) of under 18, due to the aftereffect of model Ana Carolina Reston's death, which resulted in her starving herself to death (anorexia nervosa).

Armani opened the first official Armani Ristorante in the United States in New York, in February 2009. 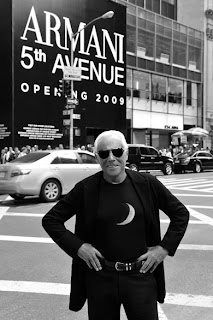 The clothing that is presented at Armani has always ignored the constant demand for novelty and possesses an elevated character.  Giorgio's approach to fashion is being timeless, and yet always timely.