Nothing like this has ever come up before...These finds are a very exciting insight into the way people dressed in the Middle Ages... It's rare that everyday garments of any kind survive from this period, let alone underwear."
- Hilary Davidson, The Museum of London's Fashion Curator, interview with the Daily Mail

Every morning, millions of women get up and put on a bra and panties, whatever shape, style, and colour they may be. For over 100,000 years (the length of time we as people were noted to have begun wearing clothes), women questioned how to dress their breasts. Breasts, being the prominent feature of femaleness, are flexible, functional, and desirable.

From a discovery made by Universität Innsbruck archaeologists, we learn of 600-year-old lace-and-linen female underwear that predate the invention of the modern brassiere and panties by hundreds of years.

These garments were found hidden under the floorboards of Lengberg Castle in East Tyrol, Austria, along with some 2,700 textile remains and one completely preserved pair of (presumably male) linen underpants. Fibre samples from the two intact bras found were sent to the ETH (Eidgenössissche Technische Hochschule = Swiss Federal Institute of Technology) in Zürich to be Carbon-14 dated. In addition, fibre samples of the pair of underpants and two other textiles were also radiocarbon-dated. Both tests confirmed the dating of the finds to be to the 15th century. 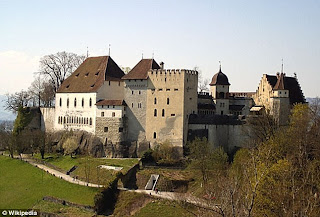 There are several theories on who developed the first bra. Most believed that the original designer was either Herminie Cadolle, a corset-maker in late 18th century France, or Mary Phelps Jacob, a New York socialite who was awarded the U.S. patent in 1914.

Although women's stiffened bodices from the late 15th century created torsos of smooth, unnatural geometry, breasts remained as sculpted round monobusts for two centuries. When the "Natural" body fashions came about in 1800, the lift-and-separate became the mode du jour, using gussets for each breast. In 1813, Jane Austen was amused that "stays now are not made to force the bosom up at all; that was a very unbecoming, unnatural fashion".

History has demonstrated little indication that bras with clearly visible cups existed before the 19th century, according to Team Leader Beatrix Nutz, an archaeologist with the Institute of Archaeologies at the University of Innsbruck, who made the find. “My first thought was what probably anybody would have thought, ‘That´s impossible, there aren´t such things as bras in the 15th century,’” Nutz tells Ecouterre.

In the medieval era, we know women wore linen tunics, washable chemises, smocks, and shifts underneath, so as to protect their outer garments. The approach to handling breasts was previously unknown, except that they used tight gowns, which, if cut well, supported the bust. The Lengberg discovery is the missing link to this previously unknown history on medieval female undergarments.

Throughout the ages, people's attire has told us about one's relationship with themselves and their environment. How women manage their breasts is one of the most intimate and fascinating ways to understand the social concerns during any era. Ms. Nutz notes that people had similar daily concerns to now: enhancing or reducing the bust "so there is no gossip in the city."

There has been some documentation found describing the wear of female underwear during the medieval era. There is a court record of a rape trial in the mid-14th-century Paris. Describing the assault, the 12-year-old plaintiff testified that the accused "la jeta à terre et avala ses braies" - threw her to the ground and pulled down her underpants.

In the mid-14th-century Paris it was normal for at least some women to wear underpants at least some of the time. However, per historians, underwear was considered more a symbol of male dominance.

The 12-year-old Parisian girl used the word for male underpants, 'braeis', which suggests that they were either identical to the male garments of the time - which were considerably longer and baggier than the ones shown below, in this article - or similar enough to those made for males.

There are limited amounts of written medieval sources on possible female breast support, but they are rather vague on the topic. Henri de Mondeville, surgeon to Philip the Fair of France and his successor Louis X, wrote in his Cyrurgia in 1312–20: “Some women… insert two bags in their dresses, adjusted to the breasts, fitting tight, and they put them [the breasts] into them [the bags]every morning and fasten them when possible with a matching band.”

The ‘bags’ referenced served the same purpose as antique breast bands – that is to contain very large breasts. However, in Konrad Stolle's chronicle of Thuringia and Erfurt in 1480, he complains that the “shirts with bags in which they put their breasts” seems to have had obtained the opposite effect one would think, as he concludes his description with the words “all indecent”.

Additionally, the following is an extract from “Meister Reuauß”, a satirical poem of the 15th century (Vienna, Austrian National Library Cod. 2880, fol. 130v to 141r), from: Schönbach 1873, p. 18. Below the extract is the English translation, translated by Ms. Nutz.

Many a woman makes two bags for the breasts with

it she roams the streets,

so that all the guys look at her,

and see what beautiful breasts she has got;

But whose breasts are too large,

so it is not told in the city,

that she has such big breasts.


Stays, or corsets, have been worn from bust to hip. In the 1900s, women began wearing "brassieres," - short, sleeveless camisoles - over corsets, to hold everything together and to avoid the pesky muffin-tops. Narrow-strapped brassieres appeared in the 1910s and the corset began to disappear through the 1920s. In the 1930s, women began using slinky, bias-cut gowns, which were as soft and natural as the first appearance, in what we know now to be the Austrian design.

Lingerie is a French word for "things made from linen." Fibre usually decays in damp ground, if buried, and suffers meticulous reuse if left behind. Medieval linen rarely survives. Those pieces that due survive the times are typically royal or saintly relics. The London Archaeological Archive and Research Centre has a collection of everyday medieval textile and clothing pieces excavated from the Thames, which yielded just a few scraps of linen and piles of wool and silk outer garments. To find any medieval linen in tact is surely a great find and exciting in itself.

Men have been known to have worn under-shirts and braies (medieval underpants resembling modern-day boxer shorts). Women were known to have worn a smock or chemise and no pants. These things were all we have known about medieval underwear. Now, because of the following archaeological finds within Lengberg Castle in Austria, we have a better idea of what some women wore underneath their dresses.

This antique büstenhalter (jub buckets) was located in a rubbish-filled vault in Lengberg Castle.

The university says it's similar to a 1950's modern longline bra. They explain: "The cups are each made from two pieces of linen sewn together vertically... The surrounding fabric of somewhat coarser linen extends down to the bottom of the ribcage with a row of six eyelets on the left side of the body for fastening with a lace. The corresponding row of eyelets is missing... Needle-lace is sewn onto the cups and the fabric above thus decorating the cleavage. In the triangular area between the two cups there might have been additional decoration, maybe another sprang work." The above mosaic is from the Villa Romana del Casale in Sicily and it is often noted as the 'bikini girls', but these women are clearly athletes and their 'bikinis' look more like contemporary, elite, women's athletic apparel.

First documented in 1190, the Lengberg Castle was rebuilt and extended into a representative palais in 1480, by adding a second floor. In July 2008, when the castle was undergoing extensive reconstruction, a vault filled with waste was found beneath the floorboards of a room on the second storey. It is believed that the items found were buried when the building was extended in 1480 and that the exceptionally dry conditions in the vault stopped the fragile garments from disintegrating over the centuries. Items such as shoes and textiles had been extremely well preserved

The discovery included four bras and two pairs of pants. Two of the bras resemble modern counterparts, but the others are described rather bluntly as ‘shirts with bags’, the August issue of the BBC History Magazine reports. These bras were particular in that they had distinct cut cups. In contrast, the antique Greek or Roman breast bands we have knowledge of were simply strips of cloth or leather wound around the breasts and designed to flatten rather to enhance.

The two ‘bras’ from Lengberg Castle that seem to be ‘shirts with bags’ are unfortunately fragmented, with only one cup preserved, but they appear to have had additional cloth above the cups to cover the cleavage, thus being a combination of a shirt, ending right below the breasts, and a bra.

The third brassiere looks a lot more like a modern bra and is possibly what the unknown German author from 'Meister Reuauß' was referring to. This brassiere has two broad shoulder straps and, as noted from the partially torn edges at the cups, indication of a back strap. The shoulder straps are elaborately decorated with needle-lace on the shoulder straps.

All the bras found are decorated at the lower end with finger-loop-braided laces and needle-lace. The fourth found 'bra' (shown above).

It is unclear to whether all women in the Middle Ages wore breast coverings, but some definitely did. It seems that it was socially acceptable to wear undergarments as a woman, but if a brassiere were worn, then they were worn to flatten, not enhance, the bosom. Enhancing the bosom was not, as writings suggest, socially acceptable.

Prior to this find, it was believed that women did not wear underwear until as late
as the end of the 18th century.

It may have been unconventional and frowned upon for women to wear undergarments, but it doesn't mean that there weren't those that did. One has to question a woman's menstruation cycle control.

During the centuries before us, most stories were told by men, due to the educational boundaries of women. Most sources state that women did nothing, which evokes imagery of women bleeding wherever they went during this time of their cycle. "However, there are two translations of the Bible, the Douay–Rheims Bible (1609–10) and the King James Bible (1611), which mention “rags of a menstruous woman” (Isaiah 64/6) and “menstruous cloth” (Isaiah 30/22). To have it translated that way suggests that the translator must have known about the possible use of a strip of cloth used particularly for this purpose – and underpants would have been necessary to have kept those ‘rags’ in place." (1)

Even though the use of female undergarments was frowned upon, there were still women noted in history to have wore them. For example, Eleanor of Toledo (1522–62) owned a pair in 1561, later, many pairs were made for Maria de Medici (1573–1642), the new Queen of France, and even English Queen Elizabeth I was noted to have worn them. Pietro Bertelli also notes Venetian courtesans wearing underwear in his 'Costumes of Different Nations' (1594).

To the left is a book illustration from a German translation of Giovanni Boccaccio’s Famous Women, which was published in 1474. It displays a lady-in-waiting of Semiramis, Queen of the Assyrians, wearing underpants. But of the Queen, it is said “Semiramis, a woman once Ninus’ wife, masqueraded as a boy, his son” and “it is believed that she gave herself to many men. Among her lovers was her own son Ninyas.”